Lara says her favorite part of the writing process is the first draft of the book, “… when the creative process is magical as the characters come alive for the author, and the plot takes on unimagined twists and turns.” She believes in good outlining, and she uses and recommends Scrivener.

It is the revision process Lara finds most laborious, but essential. She counts herself lucky to have access to a first-rate critique group she calls the brain trust. “They are there for me throughout the endless rewrites, cover copy, synopses, query process, etc.”

Lara says a good sex scene is the hardest kind of scene for her to write. “There are two in GUYLAND. Many authors refuse to write them even if they’re vital to the story. Close the bedroom door, so to speak. Bottom line, they just don’t want to deal with writing about something so personal. And I truly understand why. You feel you’re exposing your naked self to the world even though the scenes are rarely autobiographical.”

Nevertheless, she is against writing gratuitous sex scenes and says she would never include a sensual scene unless it was instrumental in moving the plot forward, and/or understanding the interpersonal relationship of two characters. “My scenes are not graphic, but they’re not prudish either.”  She says she stays away from classic romance terminology and tries to render her scenes realistic—awkward, emotional, messy, exciting, and sometimes disappointing. 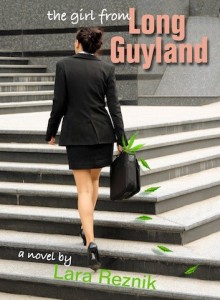 In terms of marketing, Lara began by promoting her book locally (in Austin) and used internet tools such as Facebook. “I’ve done author interviews, a few book fairs and will soon do some book signings. I’ve received some great editorial reviews from Kirkus and Reader’s Favorite. As luck would have it, the executive producer of the Late Show with David Letterman, read my book and wrote me a five star review. My biggest sales success has been the result of my Amazon promotional days. I received over 40,000 downloads and consistently ranked #1 in Suspense #1 in Contemporary Fiction, and #3 overall Amazon free sales book ranking.”

Lara mentioned two pet peeves she has about writing or writing styles. The first and most general is when an author does not take the pains to give their characters dimension. Her second pet peeve is the forgotten plot thread. “Maybe they introduce a throwaway character who never appears again but spends enough text time that the reader expects that they’re important in the future.” She says in her writing group, the authors remind each other to every word, every character, every plot line must count.

We asked Lara to get out her crystal ball and tell us what she predicts for the future of the publishing world. “I believe traditional publishers will find a way to survive in the new world of indie-publishing because they’ll always have author name recognition. I’m guilty like everyone else of buying books from my favorite authors. But there’s now a chance for new unknowns like myself who have been squeezed out from ever succeeding with the big 5 or 6 publishing houses who only consider known entities these days. It saddens me to think that the brick and mortar places may be disappearing. They just can’t compete with Amazon. But then the big boys like Barnes & Noble, squeezed out most of my favorite local bookstores so I guess there’s poetic justice in that.”