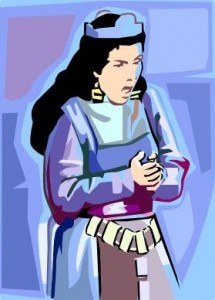 I went on a course a couple of years ago called ‘Find Your Voice’. It was for people wanting to get into commercial voiceovers…all about using microphones and marking up scripts to emphasise the right words and creating memorable characters with vocal tricks. The others on the course were real actors, hoping to get into the voiceover game, and they were pityingly tolerant of the non-vocally-talented writer who just wanted to make competent podcasts of her book.

We all went through that thing where you hear your voice and squirm because it’s not how you sound in your head but, unlike when you hear yourself on a tinny outgoing phone message, we had it booming at us in a pukka sound studio with boards full of things that blokes with ponytails know how to tweak. As if that wasn’t bad enough, then the room full of people who’d had voice training dahling discussed how you sounded. They’d make suggestions for changes; try this pace, try that tone, pretend you’re shouting at a class of toddlers or addressing a meeting of the Hitler Youth, remember when your cat died. You’d try again and listen again and sound different but this time it was less about not hearing what echoed in your head and more about hearing the things the others heard and wanted more of.

I’ll never do any voiceovers (not only am I useless, there’s little call for English accents in Toronto) but I got over my horror of hearing the wrong voice, learned a few tricks and happily podcast stuff these days. (You can read more about podcasting here.) My accents are terrible but I’ve made it a feature, rather than an embarrassment.

I didn’t realise that I’d also learned a lesson about writing until a recent interview with the lovely Carol Wyer for her blog Facing 50 with Humour. She asked for a piece of advice for new authors and I came out with ‘Find your Voice’. Then I had to work out what on earth I meant by that. I thought back to my first book, which I had planned as a travelogue with elements of worthy parenting advice and pop-psychology. I was aiming for a cross between Paul Theroux and Marge Proops with a hint of R.D. Laing.

According to readers, what I achieved was a cross between Bill Bryson and Bridget Jones. I was kinda disappointed to start with, until I realised that this was something I could do without trying because it was the voice other people heard anyway. I began to ask questions, to flesh out what it was that I couldn’t hear, so that I could do more of it. Readers helped, they pinpointed the sections they loved the best and explained what worked for them and why. I found my voice. It wasn’t what I was expecting it to sound like at all, but with readers helping me to refine what they heard, my writing improved. And it became more me-ish.

What do your readers hear from you? Do you know whether the voice in your head is the one that leaps off the page? Ask around. The great news is that the stuff people love in your writing that you may not even know about is the effortless part. You may aspire to be Stephen King but if people hear you as closer to Terry Pratchett, that ain’t so bad. You can continue to strive but you can also settle into your uniqueness by asking the right questions.

Ask readers to select a phrase or a passage that speaks to them exclusively from you and your use of language. Ask them to show you a bit that sounds unnatural. Listen to the words they use to describe your writing…do they hear lyrical and poetic? Do your characters only jump off the page when they are thinking? Do your readers giggle whether you want them to or not? Maybe they use words like chatty or conversational. If you develop all that, whether it was in your head or not, you’ll begin to use your unique voice…you know, the one you can never hear.

19 thoughts on “Find Your Voice”