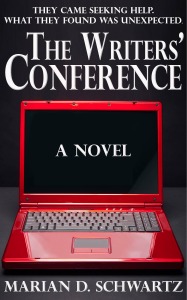 After Laura Belmont finishes writing her first novel, she enrolls in The Clymer Workshop, one of the oldest writers’ conferences in the country, where she hopes to make a connection with one of the famous staff authors or a well-known literary agent. The atmosphere at the Workshop is unexpectedly intense. The male writers on the staff are more interested in having sex with Laura than in her manuscript. Staff members worry that their reputations may be at risk. As anxiety builds and hope dwindles, Laura thinks she’s made a mistake. Then something extraordinary happens that makes her change her mind.

The Writers’ Conference is available from Amazon.com, Amazon UK, Barnes & Noble, and Smashwords.

Here is an excerpt from The Writers’ Conference…

Phyllis Baran sat woodenly at the far end of the front row in the Circle Theater, only subliminally aware of people arriving to hear her read. She had been up most of the night, trying to forget that she had ever thought of stealing Diana Rothenberg’s novel. The harder she struggled, the more the idea became fixed in her mind. When she did finally drift into a fitful sleep, she dreamed that her reading was a disaster; the audience had snickered at her, their snickers turning into waves of laughter. She had awakened sobbing, her nightgown pasted to her body with cold sweat. Now she was hollow-eyed; her forehead was creased and the blush she had applied sat on her cheekbones like twin bruises.

At three o’clock she rose and walked to the platform. She placed her manuscript—a story she had spent months unsuccessfully reworking—on the lectern, and stood stiffly before the audience. The same thoughts were circling over and over in her head: she should have chosen a published story to read instead of taking a risk with unproven material… but she had read published work last year and the year before that. In attempting to confirm her on-going creativity, she would, in the next hour, be giving evidence of its non-existence.

The first few minutes were excruciating. She read too rapidly and stumbled, her voice cracking over words like shattered glass. Talbot, seated in the center front row, lowered his eyes, embarrassed for her. She looked terrible, probably felt humiliated. Her lecture had been a mistake, more like a confession than anything. He’d better concentrate on her reading; the story was new. Maybe he’d misjudged her.

Midway through the reading the people in the audience began to shift uneasily in their seats. Not only was the story wandering aimlessly, but the sentences were dotted with clichés that most novice writers knew to avoid. The tops of Talbot’s ears turned pink when he heard Baran read, “The thought came to her like a breath of fresh air.” And his ears were crimson when she said, “Her hopes sank like a lead balloon.” He had to force himself to continue listening; never had he wanted a reading to end as quickly as this one.

Most of the staff members’ reactions were similar to Talbot’s, except perhaps to the degree of their discomfort. What was happening to Phyllis Baran could happen to them. They were witnessing the realization of one of their deepest fears: that they might someday lose their creative powers and critical judgment and stand before an audience reading work that would tarnish their names and reputations. The nightmare was being played before them, vivid and real, and they could not help but internalize it. Beads of perspiration rose on Marshall Stoddard’s bald scalp; Terence Hill’s handsome features were set in grim sympathy; and Andrew Cox slid down in his chair as if he were trying to disappear beneath the seat in front of him.