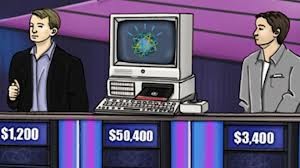 Since half of writing is editing, there is a definite appeal to the idea of online tools that can help with the process. But no matter how good a computer algorithm is, it cannot write a novel. Call me master of the obvious, but based on anecdotes I have heard recently, the obvious needed to be stated. Apparently, some folks expect the sophistication of an online program to be on par with Jeopardy!’s Watson so they can sit back and drink margaritas while the program automatically fixes everything that doesn’t conform to the Chicago Manual of Style–and all for the low, low price of $29.95.

That’s a great fantasy, but I feel safe in saying that all current tools are in some way flawed, deficient, and lacking in self-awareness. They can still be useful, though, as long as you take a minute to think about what works and what doesn’t, as I found during my recent trial of Grammarly. Grammarly checks uploaded text for a litany of issues, including: confusing modifiers, faulty parallelism, subject and verb agreement, conditional sentences, run-on sentences, the use of “like” versus “as”, etc. Each highlighted issue is accompanied by a boilerplate explanation and suggested change. For example, when the algorithm finds a potentially gratuitous comma, the feedback starts with, “Make sure you haven’t used it unnecessarily…”

The advice to “make sure” was the only valuable part of Grammarly’s suggestions for my manuscript (which had already been scrubbed once prior to the trial). The suggestions were like trick questions on a test; I ended up accepting only about two percent of them and rejected nearly a hundred incorrect proposals to change “its” to “it’s” and “raise” to “Ray’s”. (The latter was especially perplexing because there are no characters in my novel named Ray.) The lesson learned was: Don’t change anything unless you’ve done your homework and know why you’re doing it. This lesson applies not just to Grammarly, but to every tool out in existence, Microsoft Word included.

However, while the suggestions were flawed, and some of the explanations were incomprehensible, Grammarly was still useful to me for several reasons:

1) Highlighting sentences that didn’t work. A few of my sentences were flagged for multiple offenses, none of which turned out to be actual errors, at least not technically. However, I figured if the computer had that much trouble parsing the sentence, a human reader might stumble over it also. So, I ended up simplifying every highlighted sentence, and in every instance, the entire page improved because of it.

2) Introducing grammar terms I didn’t know existed. For example, I had to look up “squinting modifier”. Hint: It’s not the same thing as the evil eye.

3) Slapping down overused style choices. In some cases, it is perfectly acceptable to leave out the comma before a coordinating conjunction or end a sentence with a preposition or start a sentence with “but”. However, when Grammarly highlighted those instances all together, I could see that those style choices started showing up increasingly often about halfway through the manuscript. Neither I nor my beta readers had consciously noticed the shift, but once I made a few adjustments, the later chapters flowed much more freely.

4) Raising awareness of errors I’m particularly prone to making. Grammarly flagged a number of my conditional sentences, and I really had to stop and think about the proper tense for each situation. Again, even though the suggestions provided were not the best solutions, most of the sentences flagged did need a correction. It shook me up enough to think that there might be inconsistencies in all of my paragraphs with past/present shifts, so I read through those parts of the novel again and was able to clean up a number of subtle tense issues that had been overlooked before, by both me and other readers.

Would I pay $29.95 for another month of Grammarly service? I don’t know; I’d probably check out other options first. But this post is not intended to be an advertisement for one tool over another or for online editors at all. The point is merely to say that no matter what the tool, you can only improve your writing if you treat the program like an extra set of eyes, not a replacement brain.

21 thoughts on “Online Editing Tools: Can They Fix Your Grammarly?”