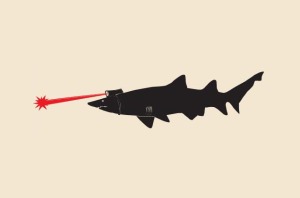 (Note, this post should be read with your “tongue-in-cheek” detector on its highest setting) 😉

If there is one thing readers hate, it’s exposition. If there are two things, the other is main characters who aren’t physically attractive and they don’t want to have crazy monkey sex with. But if there is only one, it is that blasted expository writing.

Who wants to be told something instead of being shown? Blind people, that’s who. Readers like big explosions and car chases, and if you are hoping to earn enough money from your scribblings to quit your counter job at the DQ, you have to give the reading public what they want. Ideally, you will write plotlines of such simplicity that they require no explanation or thought. But because we as writers are all a bunch of nattering nabobs who fancy ourselves “storytellers” instead of “storyshowers,” (not a word) we are inevitably going to complicate things. At some point in a book, we are going to feel like something has to be explained between the third rooftop gun battle and the fourth limo Jacuzzi sex scene, and it will be time to exposit on just what the hell is happening.

So here are some handy-dandy suggestions to get through the unpleasantness when you’ve got some ‘splainin’ to do, so that the vampiric chupacabra attacks can resume.

Have you ever watched The West Wing? How about Sports Night or Studio 60? Forget the last part, nobody watched Studio 60.

The important thing to remember is that every show written by Aaron Sorkin takes place in an endless network of Möbius Strip hallways between Point A and Point B, so characters can constantly be walking and talking. This allows them to slide some exposition in between the quips, which viewers will not be forced to notice as they are busy wondering “Didn’t we pass that water-cooler already? Are Josh and CJ walking in a circle?”

When your characters just must exchange some info to make sense of the narrative, have them do so while they are scurrying from one place to another, so that readers won’t notice it. The illusion of motion meanwhile will fool readers into thinking they are actually getting somewhere.

You know, this is when the Evil Lord Horrendicus, or whoever, captures the plucky band of adventurers and explains his Evil Plan in excruciating detail, possibly with charts and graphs. Right before hitting the Auto Kill button on a thirty second delay and promptly leaving the room.

Admittedly, this one took a hit and became such a cliché that it is almost as unforgiveable an authorial sin as including a prologue or suggesting that the two MC’s first act of love-making is not the best sex either of them has ever had, EVER. The way around that is just to have your Uber Baddie announce that he’s such an Uber Baddie he’s going to do it anyway, before throwing the lever on the John Deere Deathocaster 3000 on his way to the bathroom. Now all of a sudden you’re a clever author intentionally flouting convention, as opposed to a hack.

Readers enjoy F-bombs, they make the words between them seem more real and true-to-life.

Everybody, clothes off. For realsies. As a species, we humans pretty much stop paying attention to anything else once somebody gets naked, except for the fact that somebody is naked. So once your characters get down to their birthday suits, anything they say is pretty much irrelevant. You can then feel free to dump whatever exposition your writer’s conscience demands. And if your characters are actually full-on %&(#@ing while they are delivering a quick recap of the 19th Century decline of the Ottoman Empire, all the better.

It is permissible to have an overriding narrative element, or even a theme, only if it can be distilled into one line that may be used for laughs. “We’re musicians. On a mission from God.” If your characters can say that, they can say it as many times as they need to and the story will keep moving. Also, car chases. More car chases.

If all else fails, and you find there is absolutely no way the story can go on unless you deliver some exposition that is going to enable a reader to have a fuller intellectual experience than they might get from a half-hour sitcom, click “Literary” as a category. Then everyone will know going in that your book is horribly boring and pretentious, and they won’t be so mortally offended you had the gall to try and do something more than just entertain them. You know, entertain them in the same way you would entertain an infant by jingling keys in front of its face so it will just shut the hell up and lie there.

Otherwise, you are taking your life in your own hands, review-wise.

And speaking of reviews, I will now be bringing back the old habit of closing each column with an excerpt of a real one-star review, written by a real reader. Consider it a “pick-me-up” should you ever get a less-than-stellar review yourself. Which you will.

“You have to be really desperately bored, or lonely, or seriously chemically addicted to science fiction to get into this book. Me? I was miserable and depressed and lonely. There you have it. Otherwise it should be burned, not for content, but for LACK of such! I do have a sense of humor – it’s just not funny.” – The Hitchhiker’s Guide to the Galaxy by Douglas Adams.