Google Earth is a free, downloadable product. It does use quite a bit of memory, but if you’re doing locational research, it’s an invaluable tool. I’m no techie, by any means. I don’t get how to use some of the bells and whistles of this program. I have managed, however, to use it to find the perfect sites for fictional near-drownings, black ops assaults, and a really nice place for my characters to get a cup of coffee. 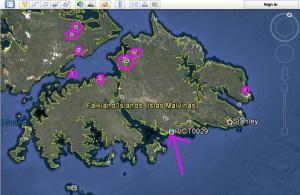 Here’s where it comes in really handy. Since I like to make things as difficult as possible for myself, I chose to have some chapters in the Falkland Islands in that aforementioned sequel to Lust for Danger. How many people do you know who have been to the Falklands? Probably not too many. But Google Earth does. How? Well, check this out. Use your little hand icon to spin the earth to the area you want to explore. Then double-click until you zoom in on your target. Well hello there, Falkland Islands! And look at what Google Earth is nice enough to share with us. I’ve circled some of them in pink for you and drawn an arrow to one – PICT0029. If you click on that little photo icon once, a window will pop up.

Google also owns Panoramio, a photo sharing site. People upload their photos, then mark the location where they were taken on Google Earth. This way, anyone who uses Google Earth can see exactly what they saw when they were standing on that very spot. 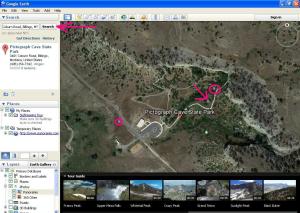 I’ll show you what happens with one of my own photos. Let’s say I want to have some teenagers who are up to no good at Pictograph Cave State Park in Billings, Montana trip over a dead guy there. How long could the body have been there? Are there secluded alcoves? What kind of terrain and wildlife would be there? Let’s find out. I’m going to zoom out from the Falkland Islands and spin my globe to North America, and towards Montana. That’s going to be a lot of work… Instead of having to spin and zoom, I can just type in where I want to go in the little window in the top left-hand corner (pink arrow at the top) and BAM! I’m there. In fact, all I had to do was type in “Pictograph Cave State Park” and Google filled in the rest for me. So you don’t necessarily have to know the address of where you want to go. Now that we’re there, we can take a look around, check out videos, or click on pictures. 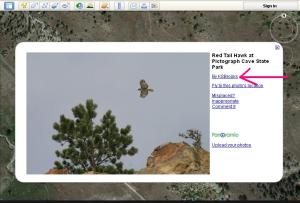 In the screen capture above, I’ve got a pink arrow pointing to the icon for a picture. When I click on that, I get a pop-up window with the photograph, and a little bit of information about it. (Image to the right.) That name to the left of the pink arrow may look familiar to you. That’s the photographer. If you click on that link, it will take you to the photographer’s Panoramio page.  Why would you want to do this? To see what other photographs that person has taken of that area, and possibly even to contact them directly. I have done that a number of times and have gotten excellent information about the location. After all, they’ve been there. 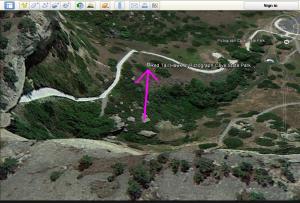 You can look from ground level, aerial level, and more. You can switch things around, without losing your bearings, if you have a photo or other icon to anchor yourself. I wanted to see what the hawk would have seen, so I clicked on the cliff, and was able to look down on where the photograph was taken. Lots of good places to dump dead guys, right? And that pink arrow shows you that same photo icon in the screen captures above. So, instead of looking up at the cliff, you’re looking down from it.

These are just the tip of the iceberg – the Google Earth functionality is amazing. Can’t Google Maps do this, you ask? Well, there is now a Google Earth plug-in available in Maps, but I can’t get it to work on my chipmunk-driven Internet. Compared to Maps, Earth allows you to zoom in so much closer, and provides you with other tools and options that Maps can’t. Try it out for yourself and see.