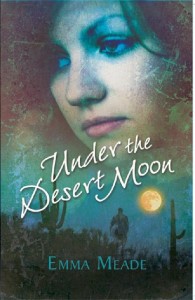 Today we have a sneak peek from author Emma Meade’s new paranormal novel: Under the Desert Moon.

Seventeen-year-old Erin Harris spends her time daydreaming, hoping to escape her small town life in Copperfield, Arizona. When a movie crew arrives unexpectedly to shoot a vampire film over the summer, Erin’s small town world changes forever. Erin is positive she has seen the star, James Linkin before in a thirty year old TV show. He hasn’t aged a day. How is this possible? Erin is determined to find out, but how will James handle the scrutiny of an all too intelligent teenage girl?

Under the Desert Moon is available from Amazon US, Amazon UK, and Barnes and Noble.

And now, an excerpt from Under the Desert Moon:

James raised his eyes finally. “I’m sorry, Erin. I didn’t mean to-” he paused, searching for the right word, “unnerve you.”

“You didn’t,” Erin replied automatically, but in actuality she was feeling distinctly unnerved, disturbed even. Those eyes, so strange, almost trance-like. Her earlier giddiness had completed evaporated.

“Are you sure?” James persisted.

Erin was quiet for a moment, thoughtful. “Oh my God,” she burst out loudly.

James had been leaning towards her slowly but now froze. “What?” he asked uncertainly, seeking to make contact again with her eyes.

“I’ve seen you before,” Erin said. “You looked so familiar to me in Casey’s Diner the other night.”

James only looked at her blankly.

“But that’s impossible,” she said.

“What is?” James’ tone was straining for a detached, almost bored air, but there was an underlying edge of anxiety.

Erin looked straight into his eyes without him having to urge her this time. “There’s this old TV show I watched with my mom when I was a kid. They showed re-runs on cable from time to time.”

She noticed how his knuckles clasped tightly.

“It was a sitcom, and the older kid in it, the college hero of the family-” Erin paused. “He looks like you, James.”

Silence. Then James stood and laughed, but it was forced sounding, and somewhat off balanced. He stared down at her. “They say everyone has a double, Erin.”

Erin rose to meet his gaze. She stepped closer to him. “I haven’t seen it in years but the resemblance is-” What was the word? “Uncanny.”

“Did she?” James smiled, and his tone was warm again. “I’ll have to catch this show sometime, check out the resemblance,” he said, confident and at ease once more.

“I don’t think they run it anymore,” Erin said, studying him.

James shrugged. “Don’t dwell on it kid.” He slapped her on the shoulder like they were old pals.

His touch was cool and she quickly moved back from him. James’ hand hovered in the air for a moment, seemingly undecided about what to do next. He put it back in his pocket.

Those eyes, Erin thought again. Like a cat, a big cat, a panther.

James stepped back from her now. “Got to mingle inside some more,” he said, backing further away.

Erin nodded, and watched him slink gracefully inside the warehouse. She was thinking of that television show. They didn’t show that program these days, but her mother had bought it on video. Where were those tapes?

Erin sat back down and switched on the camera. Even if she could find them, she didn’t have a VCR anymore. Did anyone in Copperfield own one?

The photo of his eyes loomed up at her. She’d add it to her Sight collection. Animal eyes, watchful, predatory, and waiting.

One thought on “Sneak Peek: Under the Desert Moon”