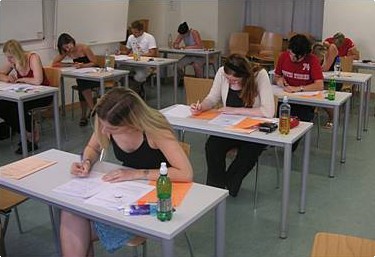 We’ve talked here before about writing styles, and also about Styles in writing. But I don’t think we’ve talked yet about different big-picture styles of writing – different formats, if you will – for conveying your ideas to someone else. So let’s nail this down.

Let’s say you want to write a business letter. I learned way back in my high school typing class (yes, in fact, it was called “typing” then, not “keyboarding” – and I thought I told you to stay off my lawn!) that a business letter has a specific format. Your address goes at the top, either centered or right-justified; then you double-space and put the date, centered; then triple-space and type the name and address for the person you’re sending the letter to; and so on. A variation on this is the open punctuation business letter, which I’d never heard of until my fellow minion, T.D. McKinnon, mentioned it last week.

So business letters comprise one major writing format. There are other specialized formats such as grant writing, technical writing, newspaper style, and the legal brief. (Obviously, there are more; those are simply off the top of my head.) Each has a specific structure, and a particular way of presenting information in order to achieve the result that the writer is after.

And then there’s the academic essay. We all learned this one in school, right? Your first paragraph includes your topic and what you hope to prove; your next several paragraphs flesh out the points you want to make, one point per paragraph; and your concluding paragraph summarizes your argument. In short: “Tell ‘em what you’re gonna tell ‘em, then tell ‘em, then tell ‘em what you told ‘em.”

Quite possibly, if you’ve graduated from high school in the United States within the last ten years, you were taught to structure paragraphs in this same way. If so, it was likely in an Advanced Placement class, and it was designed to get you to do well on the essay portion of the AP test. I am sorry to have to break this to you, but that’s the only thing it’s good for. Structuring a paragraph like an academic essay doesn’t have a single application in the real world that I can think of.

And it definitely has no place in writing fiction. Fiction has a totally different format from any of the other types of writing I’ve already mentioned. It has a structure, but its structure is generally not a rigid framework; it’s more of a supple backbone that allows the story to bend and reach, loop back on itself, and perform any number of contortions. It still achieves the result that the writer is after (we fervently hope) – just not in the same way.

I wouldn’t think this needed mentioning, but K.S. Brooks says she’s been seeing a rigid paragraph structure in fiction contest entries she has judged. She couldn’t figure out where the idea was coming from, but I remembered one of my daughters mentioning it when she was in high school.

Anyway, when you start writing, just keep in mind: a short story isn’t an essay test. Know what you’re writing and structure it accordingly.

10 thoughts on “What, Exactly, Are You Writing?”