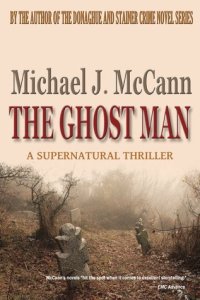 Today we have a sneak peek from author Michael J. McCann’s horror/supernatural thriller, The Ghost Man.

Simon Guthrie wanted to be left alone, but They had other ideas. First there was the car accident that claimed his beloved wife. Then came the grueling months of recuperation from his injuries. Now his constant companions are ghosts seeking worldly release. His new home is haunted by the ghost of a young girl demanding his help. His friends and neighbors are under attack by strange, destructive forces. Who is the Angry Man who haunts his dreams … and what does the demon controlling him want of Simon Guthrie?

The Ghost Man is available through Amazon.com and Amazon UK.

Here is an excerpt from The Ghost Man…

Simon Guthrie awoke later in the morning than usual, a few minutes after eight o’clock. He rolled out of bed and went into the bathroom, his mind still under the influence of the Dream. He stood for a long time under the shower, watching tendrils of soap foam flow down the drain between his feet, thinking about the little girl running between the monuments, the sudden darkness descending over the cemetery, the black mist coiling across the ground toward him. Clenching his teeth, he shampooed his hair and forced the Dream out of his head. There were other, more immediate problems to face. . . .

At the bottom of the stairs he found the portable phone on the floor. He picked it up and put it back in its cradle. On his left, separating the foyer from the kitchen, was an island with bar stools where he often ate his meals. The stools had been stacked on top of the island. One on top of the other, all four of them, balanced with impossible precision in the mathematical centre of the island. He carefully returned them to their places on the floor. The carafe had tumbled out of the coffee maker and sat on its lid on the counter. He checked it for damage, found none, and proceeded to make coffee. As he carried the grounds from last night’s pot of coffee to the trash bin he looked at the calendar on the wall. One of his chef’s knives was impaled in today’s date. Sighing, he stepped on the lever, dumped the coffee grounds in the trash, rescued his knife and dropped it in the dishwasher.

He finished making the coffee, and as it began to percolate he took a quick look around. Yesterday morning there had been a severed raccoon head in his kitchen sink. The morning before that, all the furniture in the great room had been covered with a disgusting slime that had taken more than two hours to clean up. He felt as though he were getting off easy this morning, although the knife trick was a little unsettling. He didn’t want to be around when his cutlery began to remove itself from the drawer and fly through the air.

Was that a message for him? Was today the day? The day for what? Who knew? After two weeks it was all starting to get a little tiresome. . . .