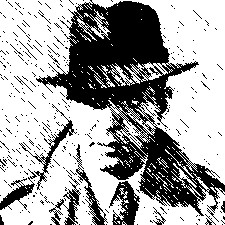 I’d heard rumors he wanted to see me; I knew they’d come, sooner or later.

There was a bang on the door just as I was turning in for the night. I pulled on my jacket and a large bearded man wearing glasses waved me into the passenger side of an old pickup. Before I could ask where we were going he slammed the vehicle into gear and started talking into his cell phone, ignoring me.

“Yes, m’am, no, m’am.” He kept saying the same things again and again, into the old flip-style phone.

It took a few minutes as he navigated us through the dark streets before I recognized him.

“You’re Rich Meyer. You work for them.”

He lowered his glasses and looked at me. Then covering the phone he said, “Sshhhh, it’s Amazon,” and, went right back to his “yes m’ams, and no m’ams.”

Meyer wasn’t the man. He was just the driver and when we pulled into the Greyhound station I knew my evening was just beginning.

Without missing a beat, he covered the receiver with his hand. “No buddy, you’re getting on. Here’s your ticket, sit beside the woman knitting the sweater.”

I stepped out of the truck and he drove off, still talking into his phone.

There was an empty seat beside a blue-haired old lady. She was knitting some kind of a sweater that had three arms, two of which were touching the floor in front of her. I squeezed in and began to ask where we were headed.

The pain from a knitting needle being stuck into the back of your hand is sharp and hurts like hell. I winced and yelped, yet no one looked around.

She pulled the needle out of my hand and placed a thick manifesto on my lap. I moved slightly away from her and covered the hole with my other hand, stemming the flow of blood. That’s when I realized I was sitting beside Kat, his co-conspirator, and some say, the co-author of the manifesto. The wig was fake and her face was caked with old lady make-up. This was no ordinary old knitting woman. I was sitting beside his number two.

We drove for hours. I read the document, learning their tactics, the part they were playing in the self-publishing revolution and how they were achieving their goals. When I tired and my eyes drooped, the knitting stopped, and the needles were raised in warning, and I’d continue reading, learning about terrorism and counter-terrorism and social disorder and how to create a Facebook event.

When the bus finally stopped we were at the bottom of a long driveway, far out in the country. I knew it was my stop, I just knew it.

I wanted to thank her. I’m not sure why, but then I remembered the hole in the back of my hand and quickly got off the bus.

It was a big house, old and gloomy. I walked into a large front room and adjusted my eyes to the half-light.

They were lined up in rows, typing on old-fashioned typewriters, clicking away in unison. I didn’t know their names but I recognized the faces from their author profiles. Standing over them was Big Al, his go-to guy. Al opened both sides of a large double door at the back of the room and motioned for me to enter. Then, just as quickly as I walked through, he closed it, and I heard a bolt being clicked on the other side.

I was in a small room. It had a desk against the far wall, no chairs, just a solitary candle flickering away on the ledge of the room’s only window. I walked over to the window, wondering if I could crawl out, and when I turned he was behind the desk in some kind of chair that had no arms or legs, just floating there, watching me.

Finally, I was face to face with the man himself. The Tony Soprano of the indie movement-Stephen Hise.

We stared at each other, then he smiled, and a little gold tooth glinted at me in the darkness.

There are times in your life when, no matter what the question, there is only one answer. I nodded, and just as I did the candle behind me flickered. I looked back, and somehow it stayed lit. When I returned my gaze to where he’d been levitating behind the desk he was gone, and I was in, the newest contributor to the Indies Unlimited staff. Glad to be here, glad to be part of the lunacy, glad to be part of history. Thanks for having me.

27 thoughts on “The Recruit”