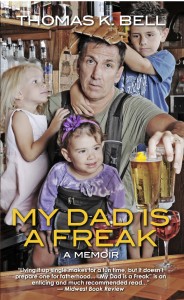 Author Thomas Bell is pleased to announce the release of his debut memoir, My Dad Is a Freak.

This is a memoir detailing one man’s serendipitous journey from bachelorhood to parenthood. After his latest girlfriend becomes his wife, and his wife becomes pregnant, Tom Bell finds himself a first time father at nearly 50 years old. Over the years, he has shown only a passing interest in his nieces and nephews, and has never touched someone else’s poo. Now, with an eight month-old baby and two toddlers, he wracks his brain for any useful cross-over skills accumulated from a half-century of single life.

My Dad Is a Freak is the conclusion that each of his children will inevitably arrive at, in their own good time, despite his best efforts.

My Dad Is a Freak was published May 20, 2012 by A.f.F. & Sons. It is available in print and as an eBook through Amazon.com, Amazon UK, Barnes & Noble and Smashwords.

Kirkus Reviews says: “The intelligence of the writing suggests that Bell is aware of the uncouthness in focusing on “subject matter [that] is nauseatingly droll coming from anyone except yourself.”

I’m sure you have one of those relatives who forwards scary emails to you. Sometimes it’s about how you should always check the back seat of your car when you get in, in case a rapist or murderer is hiding there. Sometimes it’s about how some Internet virus is going to wipe your hard drive and steal your identity and all your hubcaps. It’s frustrating because the warnings are nearly always bogus, and the person who sent the email would have known that if he or she had just bothered to go to Snopes.com before hitting “send.” Which you know because you checked it out at Snopes.com yourself, didn’t you? END_OF_DOCUMENT_TOKEN_TO_BE_REPLACED

Before I became an indie author, I did serious agent querying for my current project, and I learned that agents have discovered something more demeaning and insulting than the “Dear Author” form letter/post card/email rejection. I’ve dubbed it the “Exception Rejection.”

Here’s how it’s explained on the agent websites: “We receive such a high volume of queries, that we respond only to those in which we are interested. If you have not heard from us in four to six weeks then consider that we have passed on your project. Do not under any circumstances inquire about your submission or we will put your genitals in a vise and force you to watch us eviscerate your first-born. ” Actually, I added that last part. END_OF_DOCUMENT_TOKEN_TO_BE_REPLACED

I’m lazy. I’m honest about this. And I despise self-promotion. That’s not a very good combination for an author who’s expected to promote her own work. So trust me, if there’s an easy way to do something – I’ll find it.

Twitter used to be fun for me, so I didn’t mind going there. Now I’m so inundated with spammy comments that I hardly ever go there anymore – but millions of other people do. Authors are expected to have a Twitter presence and a following. But if you hate going there, how do you keep these imaginary legions of adoring followers entertained? Easy: you set up your author page on Facebook to generate the tweets for you. END_OF_DOCUMENT_TOKEN_TO_BE_REPLACED