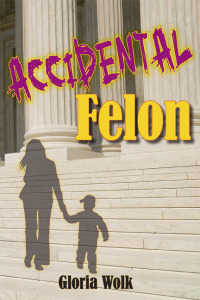 Author Gloria Wolk is pleased to announce the release of her legal suspense novel, Accidental Felon.

Carly Daniels, a single mother with a special needs child, never knew her employer was part of an industry known for fraud–until the FBI raided their offices. Her knowledge of law and courts is from television drama. Although innocent, she is indicted. She refuses to plead guilty and goes to trial, where she must sit mute while listening to witnesses lie about her. As the bottom falls out of her world, Carly must prepare for years in prison–the federal system does not have parole–and find ways to prepare her young son.

Accidental Felon was released in August 2012 by Bialkin Books. It is available on Amazon.com, Amazon UK and Barnes & Noble in print and as an e-book. 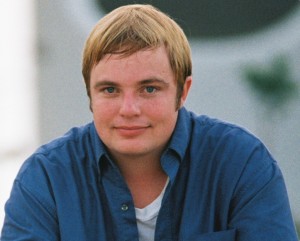 Jay lives about two miles past nowhere, after you turn off the paved road. When he’s not catching up on episodes of Scarecrow and Mrs. King he writes, mainly to stave off boredom.

In addition to somewhat eclectic tastes in television and movies, Jay reads voraciously. He enjoys compelling stories with strong characters, and will gladly read anything from comic books to Steam Punk, Harlequin romance to Kenneth C. Davis’ fantastic history books.

Jay enjoys long walks through the countryside, laughing with friends, and learning to draw something better than stick figures. His dearest ambition is to personally thank Janet Evanovich for proving that fast talking characters can be charming and goofy simultaneously. END_OF_DOCUMENT_TOKEN_TO_BE_REPLACED

Don’t you hate that sinking feeling you get when you find out you’re wearing Goochi loafers and a Rolodex watch? Your Mona Lisa is signed by Leonard DaVinci. All that money in your wallet has Art Linkletter’s picture on it. You have a gold American Espresso Card. Worst of all, you are driving a Limburgergini.

People don’t hate fake things. Oh, they’d rather have real things—real teeth, real hair, real tomato ketchup. But as long as it’s a conscious and informed choice, people are fine with it. What they hate is being duped into thinking something fake is real. Then they get angry.

Hence, the uproar over the recent discovery of the posting of fake book reviews. Like most controversies suddenly “discovered” by the media, this has actually been going on for a while. In fact, I’ve touched on this in some previous articles. I won’t bother with a link because I’m not trying to set myself up as some sort of fake Nostradamus. END_OF_DOCUMENT_TOKEN_TO_BE_REPLACED