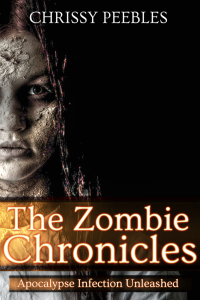 Val was bitten by a zombie and now she’s scheduled for lethal injection. Breaking all the rules, Dean Walters snags vials of an experimental serum. But it can’t be tested until Val turns into a zombie: something authorities won’t allow. Her execution is scheduled to happen before transformation is complete, giving Dean only hours to break her out. When their helicopter crashes straight into the heart of Zombie Land, his rescue mission becomes a fight for survival.and giving up on Val is NOT an option.

The Zombie Chronicles, the young adult horror novel by Chrissy Peebles, is available from Amazon.com and Amazon UK. 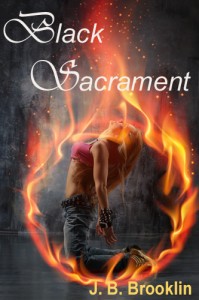 Author J. B. Brooklin is pleased to announce the release of her fantasy novel, Black Sacrament.

Sariel Baldwin, orphan and niece of the New York banker Harold Baldwin, is just about to recover from the loss of her parents when she meets Alexander, a fire demon set out to avenge murder. She doesn’t know that her uncle is the focus of Alexander’s mission. And that is just the beginning…

Black Sacrament was released late in July of 2012. It is available on Amazon.com, and Amazon UK as an e-book.

A new feature offered at Indies Unlimited is “You Asked For It.” Elina Castro asked, “What are the latest ideas/techniques in platform building?”

Our own K. S. Brooks recently discussed the importance of social media in platform building, and you can read Kat’s article here. There are, however, many additional pieces to the platform puzzle. In order for us to be on the same page I will quote from a book I really like, Get Known Before The Book Deal by Christina Katz. Just because we are part of the exciting Indie movement doesn’t mean we can’t appropriate ideas from traditionally published authors and their support team. END_OF_DOCUMENT_TOKEN_TO_BE_REPLACED

This supernatural prep school is populated by International students from the most elite of society who are blessed… and cursed by bloodlines of the most powerful families in the world. The rule is simple… Trust No One. This highly acclaimed series by bestselling author Imogen Rose prequels her book Faustine. END_OF_DOCUMENT_TOKEN_TO_BE_REPLACED