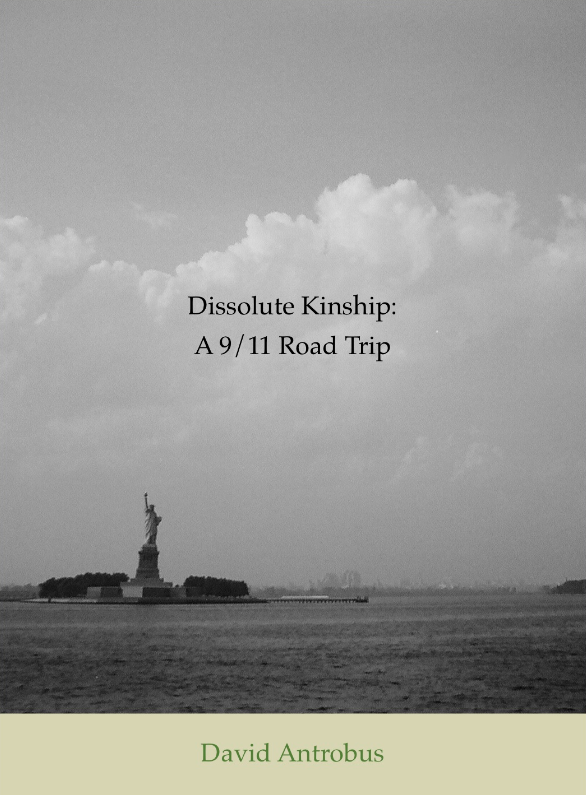 When David Antrobus set out on a personal, reflective solo road trip from the Pacific Coast of Canada to New York City, he picked a random date: Tuesday, September 11, 2001. This coincidence, despite the horrors of that day, proved oddly serendipitous in the sense of the author’s struggle for understanding of his own relatively small trauma, which he was then only beginning to face.

Evocations of the quiet melancholy of the landscape alongside poignant descriptions of grain elevators, motels, convenience stores and gas stations as he heads eastward across the Canadian Prairies are complemented by the dawning reality of New York City’s wounded presence looming ever nearer. Upon arrival, the author is at first haunted by the visceral horrors that remain just days after the attacks on the World Trade Centre, yet finds unexpected comfort in the people of the city as they relate their own personal trauma stories.

Here is an excerpt from Dissolute Kinship: A 9/11 Road Trip:

On September 11, 2001 – the day we were forced to re-evaluate our relationship with America, and therefore the world – I set out on a quest that would lead me from the Pacific Coast of Canada to New York City, and back again. By journey’s end, I would have covered over 14,000 kilometres, but the distance I was to cover across my emotional landscape has yet to be fully evaluated.

A flurry of memories. Those first inklings that something wasn’t right, whisperings from morning radios, 7:00 am Pacific time, tickling the back of consciousness. Something about missing airplanes – did the announcer just say eight of them? Turning on the TV despite it being a Tuesday, a school day. That primal shock warring with the shrill internal argument of denial. And the images of small things falling from massive towers like embers, or like leaves. (They couldn’t be people. No. No. They couldn’t be people.) The last-second adjustment of something shiny-grey and predatory as it banked and slid seemingly without sound or effort through something that had previously appeared solid. Oddly slow blooms of fire, cauliflower heads of smoke. Television talking heads. These images. Trying to make sense. Mostly failing.

One man, a retired airline pilot I believe, still haunts my dreams with his gaunt face and pinched frenetic eyes as he explained the kind of piloting skills required to do what we had apparently just witnessed. Grimacing in his struggle for words, he whispered almost guilelessly, “this is the day the rains came.”

On the day the rains came, then, the open road called to me and I set out eastward to cross this huge continent, not even sure whether the border crossings – any of them – would be reopened any time soon. As it turned out, I stayed on the Canadian side all the way to the Western Shore of Lake Superior, a four-day drive.