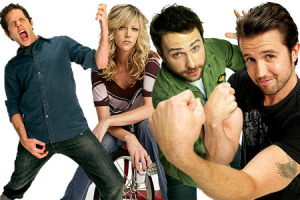 Once again, and as usual, I feel the need to preface the following by saying that I am of course just offering opinion, not defining any Universal Truths. This is just some stuff I think about some other stuff. This week, the “other stuff” is the Antihero.

First off, I need to define what I mean when I even use that word, as like many terms relating to anything literary or artistic, the idea of an “antihero” has undergone some changes through the years. A quick look at the word via the Google machine will spit back some fairly standard stuff like:

The examples cited tend to start with Satan in Paradise Lost, then maybe Scarlet O’Hara and Holden Caulfield get thrown in. Conan, Wolverine, Dexter. But to my mind the simplest example is probably Clint Eastwood in any movie where he shoots more than 2 people (which is about 95% of Clint’s movies).

However, there is a second strain of definitions, which are becoming increasingly common. They tend to dispense with the combination of heroic and villainous characteristics together at all, and run more like the following:

As may be apparent, the difference is not really that so-called antiheroes who once combined heroic/villainous elements have been replaced by those that are “amoral misfits,” as there are examples of both kinds going all the way back to Milton and Shakespeare (or a lot farther, if you want to start looking at the gods of ancient mythologies). Though I do have to admit that it often seems like the amoral misfits have taken over the mantle of “antihero” entirely. Both as a term, and as a role in literature and film.

And that, in all honesty, is where I start to yawn.

Don’t get me wrong; I am not a fan of “Mary Sue” or any other type of “purer than the driven snow” heroes in the sorts of things I choose to read or watch. But wow there seem to be a lot of main characters nowadays that I just don’t want to spend five minutes of reading or watching time with, no more than I’d want to spend five minutes trapped in an elevator with them. And it isn’t because they are not “nice” people, nor even because they don’t have many redeeming characteristics. It’s because, to me personally, so many of them are just boring.

At some point, “evil” seems to have been replaced by “self-absorbed,” and to me that is about the least interesting type of person to be around, read about, or watch. Not that I think it can’t be done well. Holden Caulfield is a sniveling little jerk, and I still think Catcher in the Rye is brilliant. James Gatsby is all surface with no depth for most of The Great Gatsby, and I still find him fascinating. And while I love It’s Always Sunny in Philadelphia, I have to admit “the gang” is a bunch of dirtbags. But I’ll still watch them every week.

To me, the older multi-layered idea of an antihero is far more interesting than straight-up heroes, villains, or the modern incarnation of Main Jerk. For me to care about and follow the story of a protagonist, they are probably going to have to care about something external to themselves; be it a cause, friends and family, whatever. But for sure, something a little more engrossing than “I want what I want because I want it.”

Barring that, they better be written brilliantly. Or at a minimum, fall-down funny. 😉

“…alternate universe War of the Roses fanfiction, with some hints of magic thrown in in a halfassed attempt to give it a place on the genre fiction shelves of bookstores.”

– A Game of Thrones by George RR Martin