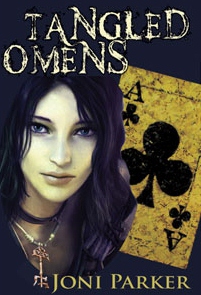 Today we have a sneak peek from the epic fantasy novel by Joni Parker: Tangled Omens.

The second novel in the Seaward Isle Saga finds the young female warrior, Lady Alexin, assigned the mission of tracking a pirate spy. Alex’s adventures continue as she is drawn deeper into the mysteries of Seaward Isle and in her new role as a Tracker, she will experience new aspects of her own gifts bestowed on her by her Titan and Elf ancestors.

Here is an excerpt from Tangled Omens…

With a great racket, a dozen large seamen suddenly rushed past Aqua into the tent. She screamed as one grabbed Alex by the hair and dragged her out of the chair. Eclipse screamed as the bystanders rushed away.

“Gentlemen, I told you to be polite.” A tall, handsome man dressed in fine clothes entered the tent and smiled coldly. “The Witches of Winden, a pleasure to see you. The accuracy of your prophecies is legendary!” Then, he violently slammed his walking stick on Eclipse’s table. Whap! “I understand you were in Pashkina. Tell me what you saw!”

Aqua and Eclipse were too frightened to answer.

“Answer me!” He slammed his walking stick on the table again. Whap! The cards went flying into the air.

Alex bent down to gather them up before they blew away.

“We were at the palace about to give readings,” Aqua said, “and then, I saw this huge, blue thing run into the room, followed by more large, ugly things. We ran to a ship and got away. That’s all we saw.” Her hands shook as she waved them in the air. Her eyes were opened very wide with fear.

The man motioned for her to come forward. Two men lifted her by the arms and stood her in front of him.

“Where was Pashamon?” He glared at her.

“One of those ugly things grabbed him and tore his head off. Blood went all over.” Aqua grimaced with disgust and shook her head.

“What about the prisoners in the dungeon?”

“That’s where the ugly things came from!”

The man slapped her with the back of his hand and sent her flying.

“You, witch, give me a reading, now!” The man pointed at Eclipse.

“I need my cards.” Eclipse stood at the table, shaking. Another man forced her to sit.

Alex handed her a stack of cards. “Here.” She stepped back from the table, but stayed inside the tent, acting like an assistant. She glanced nervously at the two large men on either side of her, wondering what she could do if they decided to attack the witch.

Eclipse took a deep breath and shuffled the cards. “Let’s begin.” She spread the cards across the table. “Pick a card.” She swallowed hard.

The man drew the Jack of Diamonds.

“I know that. Continue.” He waved his hand at her.

Eclipse placed his card in the middle of the table and placed four cards around it in a circle face down, just as she had done for Alex. She turned over the card at the top, the King of Spades. “You’ll be most successful in your career. You’ll reach the top of your field.”

“The Queen of Hearts. A woman is madly in love with you and wants to marry you.”