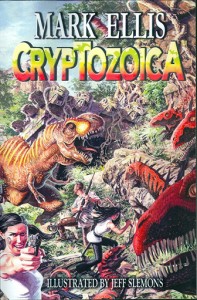 CRYPTOZOICA
by Mark Ellis
Genre: THRILLER/SF
120,000 words (appx)
Lost World And Lost Souls! Deep in the jungled hell of Big Tamtung, a forgotten island in the South China Seas, a miraculous ancient substance is found that will unlock the secrets of life on Earth– Prima Materia, a fabled material that has been whispered about since Biblical times. Two centuries before, Charles Darwin discovered the last pool of Prima Materia on Big Tamtung but his discovery was suppressed by The School of Night, a secret society of scholars founded by Sir Walter Raleigh.

Now, when a small group of scientists and fortune hunters explore the jungles of Big Tamtung, they must endure frightening tests of their ingenuity and courage, as they struggle against ancient terrors–a lost world of dinosaurs and a miracle older than time.

Mark, how did you come up with the title for your book? Does it have any special meaning?
I wanted a short, memorable title that implied mystery as well as something ancient: Cryptozoology and the Cryptzoic Era were the obvious choices. In the book, CRYPTOZOICA becomes the name of an island in the South China Seas.

Who was your favorite character and why?
I suppose it’s the favorite character of everyone who has read the book—BAI SUZHEN aka Madame White Snake. She is my take on Milton Caniff’s iconic Dragon Lady character from Terry and the Pirates. Part femme fatale, part businesswoman, she keeps the story moving and the other characters guessing.

Does your book have any underlying theme, message, or moral?
Scientific discoveries, like anything else, can be open to interpretation and even suppressed if they don’t fit an agenda. This is rarely done for noble purposes and rarely do such actions have good outcomes. Science should be used to explain mysteries, not to perpetuate them for profit.

What would/could a reader or reviewer say about your writing that shows they “get” you as an author?
That I deftly balance action, plot and humor with memorable characters…and that I obviously do a lot of research.

Give us an excerpted quote from your favorite review of this book:
While many writers have tried to reignite old pulp adventures with mixed results, CRYPTOZOICA takes the idea and mixes in a few other things to come out with a blast of reading fun.

Where can people learn more about your writing?
www.MarkEllisInk.com