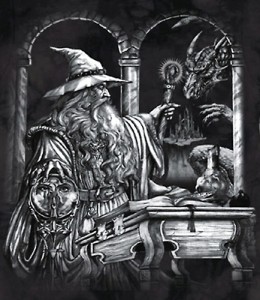 While I usually try to keep Ed’s Casual Friday to topics that might be of general interest to writers / readers of all kinds, today I admit I am staying in my wheelhouse. What follows is a list relating mostly to writers of Epic Fantasy, though some items will fit any sort of writer with a couple different words substituted. Others are probably unique to the species. Also, if you at any time sense an implication that I am saying you MUST have been (or still be) a Dungeons & Dragons nerd to write Epic Fantasy, I am really not saying that. Though I will say that it helps. 😉

*
Twenty Signs You May Be An Epic Fantasy Writer
*

19. You can’t find Myanmar on a map, but you can find Mordor.

18. Even while driving a car, you measure distance by how far a guy can ride a horse in one day.

17. You are not impressed by vampires, but know not to mess with liches.

16. When the phone rings while you are writing, you occasionally answer in Orcish.

15. You routinely spell one of your own character’s names wrong at least four different ways.

14. You find yourself wondering if Polgara could take Gandalf in a fight.

13. You can recite lists of Elvish Kings, but aren’t real sure who was president before Carter.

12. None of the board games in your house still have the six-sided dice in the box.

11. When someone asks, “Who is that writer with too many initials in their name?” you ask “Which one?”

10. Your book is about more things than it is not about.

7. You groan aloud whenever anyone in a movie shouts “Fire!” to a bunch of archers.

6. You wish G.R.R. Martin would start jogging or something, as that dude doesn’t look like he’s going to make it.

5. You know what titled noble is properly addressed as your Lordship, your Grace, your Highness, and your Majesty.

4. You think goblins get a bum rap, but hobgoblins can’t be hated enough.

3. When you see Paranormal Romance titles at the top of the “Fantasy” book charts, you want to Magic Missle somebody.

1. You are reading this while you are in line to see The Hobbit for the sixth time since yesterday.

“(I)t didn’t relate to many real world issues, except for maybe something like peer pressure when Bilbo is forced into coming on an adventure.”

The Hobbit by J.R.R. Tolkien