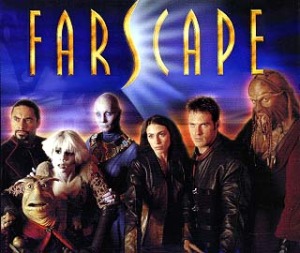 Farscape, for those of you who don’t know (which could be almost all of you) was a Sci Fi show that ran in the US on the channel that used to have that name, from 1999-2003 (four seasons). It was a dual US/UK production, shot in Australia where most of the cast and crew were from, and as such I always thought it had a uniquely “blended” feel that made it stand out from other shows that might be all US, UK, or Australian creations. I was a big enough fan to buy DVD’s as they became available, and it’s still one of my favorite shows of its kind.

Because the first season originally ran on Australian television as well (and, I believe aired there a bit before they did in the US), the “hour-long” episodes of that season were actually about 4 to 6 minutes longer in their original incarnation. Yes, my fellow Americans, the rest of the world *is* actually less inundated with commercials than we are. On the first DVD season, the episodes ran at their original length, as opposed to with “Deleted scenes” appended at the end. Watching the DVDs for the first time was thus a different experience from seeing them as they had played out in the manner they originally aired in the US, after the cuts.

In general, I found that I liked the unedited versions a good deal better. Of course I may have been a bit biased, seeing as how I had liked them at the length at which I had first seen them to buy the series. It would be expected that I would like more of something I already liked even more than I liked less of it. But really, there was a bit more to it than that.

The cuts between the Australian and US versions were largely of two types. Obviously no major plot points were going to get snipped out of an episode, so the stuff that went were largely things that did not impede the narrative by their absence. First were the sort of “connective tissue” bits between more important scenes. For example, if half the crew goes from the ship (Moya) to a planet, and the audience knows from earlier episodes that the only way down is via a shuttle craft (transport pod), you can lose the scene where Aeryn and Ka D’Argo actually fly down, and go right to where they show up on the planet to save Crichton from whatever mess into which he has wittily blundered. The audience can fill that bit in for themselves without having their collective hand held, and those scenes don’t add much either to an episode, or to the show as a whole.

The other sort of scenes that got the editorial axe for the sake of time, however, were what I will term “character scenes.” They were mostly quieter moments with two or more characters talking; either adding a bit of (Gasp! The horror!) exposition around the edges of the episode (“You know, that planet down there wasn’t always like this…”) or else the characters revealing more about themselves, either through their decision-making or with something touching on their backstories. Sometimes things were brought up that had absolutely no bearing on a given episode, yet they returned subsequently to inform later episodes or even later seasons. Even if some of those seeds weren’t planted for US audiences, they plainly had been for the writers and actors involved.

Just to repeat, I enjoyed Farscape enough even without those scenes which had been excised to buy it on DVD, as I knew it was the kind of thing I would watch again. I was a fan, even before discovering that there had been more to some of the episodes than I had known when originally watching them. But I did, every time, like them more after seeing what I had missed. For me, the characters were richer, the stories were fuller, and the over-all “world” of the whole show was expanded.

An awful lot of the writing advice delivered by the self-proclaimed experts involves cutting down everything not absolutely critical to advancing the story. Keep it moving, keep it simple, cut to the chase, so forth and so on. That’s fine, and to tell you the truth, it’s probably good advice to make your book more accessible to a wider number of people, as let’s face it: Not every reader (or writer) is a rocket scientist. And not even every rocket scientist picks up a book every time looking for anything more than entertainment or diversion. The cultural attention span seems to shrink by the millisecond, and giving people less may be a good way to avoid boring some of them. That is the heart and soul of aiming for mass consumption – speak to the least common denominator in all of us.

But let me ask you this. Think about your favorite book of all time, or maybe your ever-revolving list of the top ten or so. How many of them do you love because they were just so slick and action-packed? Because they just floored it from page one and never let up? Because reading them was, which so often seems to be the goal, just like watching a movie? Are all your favorites like that? Or, did some of them stay with you because there was something more to them? Did they speak to you, like the author was inside your head or your life, even for just a moment? When people talk about reading books that changed their lives, they usually aren’t talking about the novelization of Transformers XII.

No, I am not saying that every book needs to strive to be a classic, nor that every author nor reader needs to take every little thing so serious that reading and writing becomes some agonizing intellectual exercise for everyone involved. But I am saying that, for me, I sure hope that some writers in all fields continue to strive to create something more than just a “good read” or a “decent watch” every time. I can’t think of a single book, TV show, or movie that I love, of which I wish there was less.

“I’ve read War and Peace, but I can’t remember anything about it execpt it was, to me, dry and dull.” (sic)
– War and Peace by Leo Tolstoy

8 thoughts on “Farscape, and Cutting to the Bone”