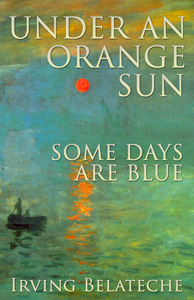 Under An Orange Sun, Some Days Are Blue
by Irving Belateche
Genre: Contemporary Fiction, Inspirational
55,000 words

Hollywood screenwriter Ben Cross is broken-hearted after the death of his young daughter. Even though he knows it’s impossible, he still wants his little girl to have the Hollywood ending she deserves. And so Ben begins a desperate personal quest, searching for some sign from her. Consulting self-help gurus, philosophers, and religion, he derives a set of principles that reinforce his belief that everything can still work out. First, he applies those principles to finding that sign from his daughter. Then he applies them to his writing–to his career–to everything else in his life. Along the way, he discovers which principles work and which don’t.

We’re led to believe that everything in life must go our way, and, if it doesn’t, that something is wrong with our life. Well, nothing is wrong. Sometimes things go our way and sometimes they don’t. The title needed to capture that idea in the simplest way possible.

Who was your favorite character and why?
I’d have to say my favorite character is Ben’s sister-in-law, Susie. She tries to convince Ben (the main character) that his young daughter, who recently died, has left him a sign. She tries to convince him without using platitudes or forcing him to believe in something that he can’t believe in. She doesn’t force her spiritual viewpoint on him. Instead, she tries to help Ben by using Ben’s own belief system.

Does your book have any underlying theme, message, or moral?
It has quite a few messages! I call them ‘principles’ in the book and that’s the focus of the book. Principles to live by. Ben tests each principle by applying them directly to his life. Either a principle works or it doesn’t. He doesn’t try to force it to work by justifying it.

What would/could a reader or reviewer say about your writing that shows they “get” you as an author?
That my story moved them emotionally.

Give us an excerpted quote from your favorite review of this book:
“I loved this book. It’s bold, honest and deeply moving.”

Where can people learn more about your writing?
http://on.fb.me/irvingbelateche